According to the Python Developers Survey 2021, Django has consistently maintained its position in the top-3 Python web frameworks.

So, if you are looking for a source to take care of the hassle of web development Django is your pick.

For example, Python alone cannot handle the backend development of your e-commerce website. A python developer who is skilled at Django can do the job for you. 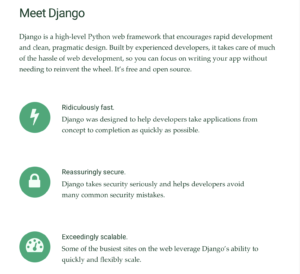 Step one is to hire Python developers. A skilled professional can ensure that your website runs smoothly, maintain it and save your precious time.

That is if you hire Python developers who are good at their job. But, how do you assess that?

Take a look at our guide to hire quality Python developers.

Five technical skills to look for

A django web developer should be able to write good code in Python.

They should be able to work with multiple libraries, PEP8 and Django packages.

The same elements can be written in Python and C in a Python code. Hence, hire Python developers who are able to build system prototypes in Python first and move selected components to compiled languages like C and C++.

They should also be able to simplify system maintenance while also amplifying system performance.

To do this, they should be able to retain the elements that do not require the performance offered by C/C ++ in Python after debugging the prototype.

Hence, hire Python developers that also have some knowledge of C and C++ language.

With web scripting, Python developers can create and embed scripts in a web page.

They should be able to perform the operations in both client mode and server mode.

To perform this, the developers should be familiar with the Python libraries.

The simplicity of the programming language and high development speed, make python perfect for creating a graphical user interface (GUI).

Hire Python developers who know how to create GUI through options like Tkinter toolkit.

Mathematical calculations are a given when working with Python.

With this, a developer can create animations, 3-D objects, organize parallel calculations and so on.

Inquire about familiarity with SciPy extension. These additional libraries of Python are meant for scientific computing.

Knowledge of the MVT architecture

MVT (Model-View-Template) architecture is a software design pattern for developing a web application.

It has three parts:

Model – Acts as the interface for data and maintains it. It will form the logical data structure behind your entire application.

They should be able to create and run a project in Django. To verify, look at some of their previous Django projects and have a look at the code.

Even if you haven’t thought about an app yet, hire a developer who has the skills to convert your project into an app whenever needed.

Django is known for its unique and fully managed app structure.

Check the developer’s portfolio to see if they have created apps in Django before. Every app in Django functions as an independent unit in supporting the main project. 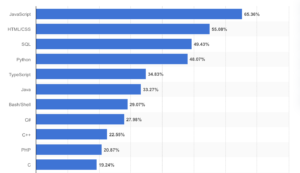 The worldwide survey of 2022 showed that Python is one of the top five most widely used programming languages around the world.

Hence, you will have no problem finding a skilled developer that can assist you with your needs.

However, computer skills aren’t all that you need. To make your project a success, you need to hire python developers that also possess certain important soft skills.

Hire python developers who have these three important soft skills.

There is never only one person working on a project. Often multiple people work on the same code.

Beyond that your developer has to explain the logistics of the project to non-IT professionals, hence, communication is crucial.

A very important soft skill especially for developers with no prior experience of working for/with someone.

Things won’t always go their way. Software development is not an easy feat. It is a complex effort. From the project kick-off, through the project execution, testing, deployment, updates, the work environment is completely different.

Inquire about how they would cope in different situations.

You need a developer who is ready to learn. They should be curious.

This way even when they are confronted with something they don’t know, they’ll be willing to take the time to research and learn about it rather than just giving up.

How to test the skills before hiring?

Before you hire python developers, you need to assess the skills that we have outlined. Here’s how.

Always request a portfolio. No matter the coding background, not having a portfolio is a warning sign.

A portfolio reflects a developer’s development level, their career goals, the skills they’re focused on acquiring, and more.

Especially focus on the projects section. See if they used relevant libraries before, if they have used C++.

To assess soft skills, look at how many projects have been solo and how many were in collaboration.

This will also help you prepare the questions for the interview.

Peek into their GitHub

A GitHub account is like a developer’s LinkedIn. You get to see where the developer has worked on open source projects and contributed to others’ initiatives.

You can also look at:

Inquire about their use of Stack Overflow

Every programmer has found themselves on Stack Overflow at least one time or the other.

You can check out the developers’ reputation on Stack Overflow as well as their top answers.

This is the surest way to assess a developer’s coding skills.

However, cut them some slack. It is incredibly stressful to code and communicate while in the presence of an interviewer.

You can do this by using online interview tools which allow you to screen share. Ask them to start a project in Django and observe how they do it.

It will shed light on their:

Now you have all the relevant information to hire Python developers in 2022. Get ready to start your search.

How to Spot a Fake Cartier Watch